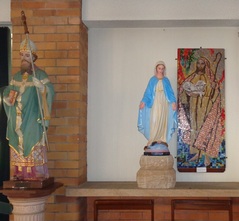 Moral Formation
Moral formation within the Catholic Christian Tradition is founded on the innate dignity of the human person, created in the image and likeness of God. Students develop strategies needed to have a clear-sighted​, honest, realistic attitude towards themselves, other people and the world in which they live. They investigate ways in which moral living is shaped by personal, social and cultural factors and by the social teachings of the Church.

Students are introduced to the scriptural foundations for Christian moral living, specifically the Decalogue (Ten Commandments), the ‘Greatest Commandment’ and the Beatitudes. Christian moral life is presented in the context of relationship; relationship with God in solidarity with others and the whole of creation. Students are challenged to live a virtuous life, doing good and avoiding evil, seeking not just their own happiness and fulfilment but the happiness and fulfilment of others, the creation of a just world and the well-being of all of creation.

Guided by a fundamental belief in the dignity of the human person and of all creation, students grow in moral understanding, sensitivity, and discernment. They develop their ability for moral reasoning while recognising their ongoing need for love, compassion, conversion, forgiveness and reconciliation. Students investigate processes and frameworks for moral decision-making and learn to make informed moral decisions in the light of a carefully formed conscience, guided by prayer and reflection on the Word of God, the life and teaching of Jesus Christ, the witness and advice of others, and the authoritative teaching of the Church. They learn about acting according to rational judgement, taking into account the good of all.

Mission and Justice
When individuals and communities express in an active and practical way who they are and what they do because of their relationship with Jesus Christ, they are engaging in the mission of the Church. Students explore the many and varied ways believers are called to give witness to the beliefs and values of the Catholic Christian tradition and proclaim the good news of Jesus Christ. They are challenged to understand how maintaining Christian integrity will at times require thinking and acting in ways that run counter to the dominant culture.

Students examine how moral living within the broader context of the mission of the Church is expressed through action for justice. Students engage with the major themes of justice derived from scripture and Church social teaching. A Catholic Christian understanding of justice emerging from the Biblical tradition is expressed through respect for the human person, promotion of the common good, promotion of peace, solidarity, subsidiarity, stewardship, participation, economic justice, rights and responsibilities, and a preferential option for the poor.